Be the first to get the latest news and offers from jeri.com, straight into your inbox!

Here are some important and interesting facts about Brazil and Jericoacoara.

It is better to have local currency before getting to Jeri. Cash can be exchanged or withdrawn from ATM machines at the airport or in Fortaleza. Try to get small denominations, since sometimes it can be tricky getting change.  In Jijoca (last stop before Jericoacoara) there is an ATM machine and a bank agency.  There is also a Post Office branch in Jericoacoara that acts as a Postal Bank to Bradesco´s account holders, with a daily limit for withdrawal.

Real R$ (pronounced "heh-al"), plural is reais ("heh-eyes") and centavos. http://www.convertit.com/Go/ConvertIt/Currency/. Jericoacoara is a simple village which means it does not have some of the facilities we are often used to. So please pay attention to the following:

There are NO ATM´s. Therefore you will rely on cash, credit cards, and foreign currency (Euros and US dollars). Try to get Brazilian currency (Reais R$) while at the airport or in Fortaleza where there are ATMs. Usually, these cash machines work until 10 pm.

It is possible to exchange money (Euros and US dollars) but the exchange rate is not as good as you will find in Fortaleza.

It is NOT POSSIBLE TO EXCHANGE TRAVELER'S CHECK in Jeri. It is only possible to exchange cash (Euros and US dollars).

Contact your travel agent or the Brazilian consulate to find out if a visa is required. Tourist visas are usually granted for 90 days and may be renewed for more 90 days.

Any time is a good time to visit Jericoacoara. The weather only varies slightly. There is more wind and sunshine between July and February. After February until June the "rainy season" begins, which means you will experience rain showers and cloud cover that, occasionally, can last an entire day, but most often clears up.

National Holidays from December - February. This is when Brazilians (particularly from the south) take their vacations and go to the Northern beaches. At this time it is wise to book ahead since accomodation options can fill up and run out of vacancies.

Renting a car is not necessary and not advised since the road is difficult to drive in and you need a driver that knows well the road to make it through the sand and dunes.

There is NO HOSPITAL IN JERI, only a limited health center. There is one small medical center in Jijoca (1 hour by car) which offers limited service and the closest hospital is in Sobral, which is 3 hours by car. It is important to BRING YOUR MEDICINE since the small pharmacy in Jeri has a limited stock of medications.

In the summer (October to February) you'll barely have a cloudy day and there is a lot of wind, making Jeri a paradise for windsurfers and kite surfers. The wind also helps to make the temperature feels a little less hot.
In the winter (March to July) is the rainy season, which means that you will have some days that are cloud filled resulting in moderate to heavy pouring rains, which often ends within one hour or less.

International dialing code +55 88 and the number you want to call.

There are plenty of cybercafes to access the internet in Jeri and hotels where you can connect your laptop or smartphone using wireless connection.

Feb/28 to mar/5, Carnaval: seven days leading up to Ash Wednesday, usually falls in February. It is more popular in Rio, Salvador, and some of the other big cities.

November 2, Dia dos Finados (the Day of the Dead)

November 15, Proclamation of the Republic

Take the stress away from organizing your vacation and book with jeri.com. 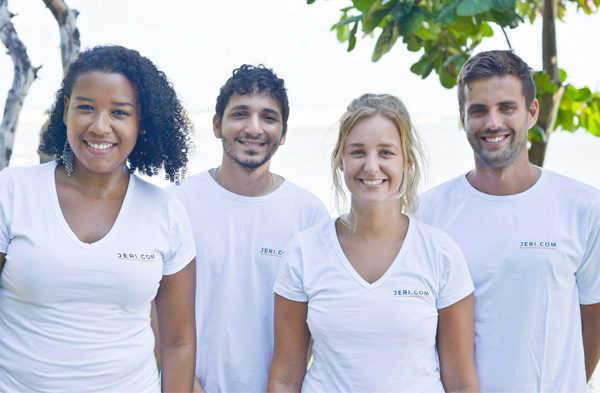 Need help arranging your trip to Jericoacoara?
From accommodation to tours, activities and transfers, jeri.com can help organise your perfect vacation